There's a postdoctoral position that has opened up in Mark Byrd's group at Southern Illinois University.  The research will deal with optimizing error-correcting code strategies.  This position will start in a few weeks.  For further information, please contact Mark at:

I only heard about this conference at the last moment through a colleague at USC. The line-up of speakers is excellent as are the problems that they will be talking about.
Where: MIT
When: May 3 - 4
Posted by The Quantum Poet at 4:05 PM 3 comments:

This is the third installment of Categorically Not for 2011. This is a series that was started three years ago by KC Cole. The talks are intellectually stimulating. If you are not too busy this Sunday (March 27) evening, please join me at the Santa Monica Art Studios (a.k.a The Hangar). While the talks begin at 6:30 p.m., I highly encourage arriving early because seats are limited and they go quickly. Below is the excerpt from the Categorically Not website:

Politics has been around longer than people. In fact, just about every living thing on Earth is engaged in some kind of power grab—the better to survive, reproduce, make the world safe for our progeny and, with any luck, evolve. Politics usually means trouble because goals can clash. So we do our best to manipulate, coerce and persuade—using intimate conversation and mass media, art and song, law and government, and all too often, violence. For this month’s Categorically Not! we’ll examine politics in the realms of art, activism and close primate relatives.

Jim Lafferty, executive director of the LA chapter of the National Lawyers Guild—an association of lawyers, law students and legal workers who give their time to protect the rights of ordinary folks—wonders whether there’s a future for the political activism in the U.S. What happens when governments chill free speech for all but the bravest and most committed; when the Supreme court decides corporations are more important than people; when concentrations of money, power and media make mass movements all but impossible. Is the human political animal obsolete in our country?

Change often requires what Robbie Conal would call Art Attack. “America’s foremost street artist” according to the Washington Post, Robbie’s posters skewering politicians, bureaucrats, and “other people dangerous to democracy and the future of rock'n'roll” have lined the streets of major cities; he’s the subject of the documentary “Post No Bills” and recipient of a NEA individual artist’s grant (he has an MFA from Stanford). Featured in venues ranging from The Wall Street Journal to "Charlie Rose,” Robbie’s work will be on display at the hangar, along with his book: “Not Your Typical Political Animal.”

Humans aren't the only political animals, of course. USC Anthropologist Amy Parish will discuss politics among other species, especially our closest living relatives--chimps and bonobos. As Amy's research has revealed, bonobo societies are dominated by females, who control access to everything from food to mating. Such a political landscape challenges many popular assumptions about human evolution—including the “natural” political order of things. At USC, Amy teaches classes on Darwin and culture, ethical issues in health and "Love, Marriage, and the Experience of Being a Wife.”

This program will take place at our usual home, Santa Monica Art Studios. Come at 6 for refreshments and wander the studios. Program begins at 6:30. We ask for a $5 donation to cover expenses.

View Larger Map
Posted by The Quantum Poet at 7:04 PM No comments:

I will be reading some of my poems at Beyond Baroque in Venice, CA on March 13th. My dear friend Sholeh Wolpe will also be reading some of her poems along with poets Alicia Partnoy, Melinda Palacio, and Ramon Garcia. You can find more information about the event at the Facebook event page set up by the organizers of Beyond Baroque.
Beyond Baroque is located at 681 Venice Blvd, Venice, 90291. The event starts at 4:00 p.m. Admission is $7.00.

View Larger Map
Posted by The Quantum Poet at 1:26 PM No comments:

The 11th edition of the Canadian Summer School on Quantum Information and the 8th Canadian Student Conference on Quantum Information will be held from June 6th to 17th 2011 at the Centre de Villegiature de Jouvence, located in a Quebec National Park. Once again this year, many of the world's leading experts on quantum information will present series of lectures targeted at prospective and current graduate students, as well as postdocs, in the areas of physics, mathematics, computer science and engineering. The Student Conference is a unique occasion for students to present their work and exchange with their fellow students. More information about these events can be found at the web page

Posted by The Quantum Poet at 9:44 AM No comments: 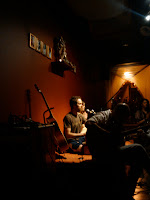 I have been attending my yoga teacher and friend Travis Eliot's kirtans on Fridays at Bhakti Yoga Shala in Santa Monica. For those of you who don't know kirtan comes from the Sanskrit and means "to repeat." It is a call-response form of devotional singing. Travis leads the Sanskrit mantras and the audience responds. The mantras are usually short. As Travis explains it through a metaphor, imagine a windshield wiper moving back and forth and in the process cleaning the windshield. The repetition of the mantras are windshield wipers cleaning us spiritually.
I had the pleasure of listening to Daphne Tse who was a guest at Travis's kirtan this past Friday. She came all the way from Bali, shared her beautiful voice and led the second half of the kirtan with her magical "Saraswati Mata." I highly recommend checking out her album "Mata." This was a truly amazing kirtan because two hours got compressed into two minutes. I guess bliss can relativize time. You don't necessarily need to board a spaceship and travel at the speed of light.
Posted by The Quantum Poet at 8:11 PM 1 comment:

Vinay Deolalikar and P vs. NP

The mathematics and computer science blogs are a-buzzin' about Vinay Deolalikar's unverified 100+ page proof that P does not equal NP. This paper is still a draft, and in a very preliminary form. Vinay happens to be a graduate of the University of Southern California. His advisor was P. Vijay Kumar. Dick Lipton talks about it in his blog, as do Scott Aaronson, and Greg Baker. Dave Bacon talks about it over at the Quantum Pontiff blog. I did read a little bit of the paper, and there do seem to some new ideas there. Scott has said that if the proof is correct, i.e., P <> NP, he will supplement an extra $200,000! As you wil recall this problem is one of the famous Clay Millenium Prize problems, and the Clay institute will award one million dollars to the person who solves it. The correctness of this proof would be quite remarkable. I just don't think that the problem's end time as arrived yet. I can place the hardness of this problem on an equal footing with other hard problems such as graph isomorphism, the Riemann Hypothesis, Navier-Stokes etc. Graph theory and complex analysis have been around for well over a hundred years. They are both mature fields of study, where as theoretical computer science has been around for only forty years. Vinay's purported proof must have some groundbreaking calculations and insights to arrive at the final result. The journey in this case is equally as important as the end result. I do hope that the proof is correct.
Posted by The Quantum Poet at 9:25 AM 1 comment: