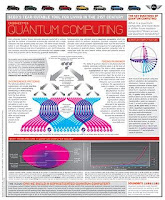 I found this interesting crib-sheet on quantum computers at Seed magazine. I really liked the illustrations depicting quantum superpositions and interference ideas. The writer of the crib-sheet, Lee Billings, also mentions D-Wave Systems at the very end, and how the company claims that they have demonstrated the first working commercial quantum computer.
Posted by The Quantum Poet at 12:40 PM No comments:

The Mission (Accomplished) at the City Garage Theater

Los Angeles never ceases to amaze me. I was invited by my friend Lejla to this gem of a theater, called "The City Garage Theater" situated in an alley, yes an alley, in between third street promenade and fourth street in Santa Monica. It is a very small theater and seats about forty people which is fine by me because it makes the experience of watching a play all the more real and engaging. The play is directed by Frédérique Michel. The play was quite abstract, intellectually stimulating, hardy and packed with a powerful punch. There were a few scenes which I felt could have been done without the nudity. There were some plot lines which I wish could have been developed further. The wrestling, Indian Bharatnatyam, a bit of singing combined with current politics of the Bush administration makes this play worth watching. General audience tickets go for $20.00 and student tickets go for $10.00. You will have to show your student ID to get a discount. Below is an excerpt from their website.

Palmer's current work reminds one of seeing the horizon of a sand dune, or a desert mound far out in the California wilderness, speckled and spotted with vagabond and hardy bushes and shrubs, rising above the horizon. When I entered the gallery space itself amidst a throng of people and looked at the panels on all four walls, my impression was, "Hmm...is that it?" However, when I went closer to the panels and inspected them, I could see that there was quite a bit of work in these paintings. They are all black and white with splotches of gray that mark the rather sombre desert sky. The scenes in the various panels form a continuum with a single, thick, black line running across the middle, on which sit these various desert flora. The medium is sumi ink with which I have to admit I have never worked before. In the past I have played around with charcoal, India ink, and graphite. There were also some larger panels at the very entrance of the gallery and I actually found them more to my liking; pieces that I could hang at my place and stare and reminisce day in and day out.

The current exhibit runs till the end of May and I highly recommend going. Who knows, perhaps you may even like a piece and end up owning it!
Posted by The Quantum Poet at 1:56 PM No comments: