Categorically Not - "Inside Out"

Once again K.C. Cole brings us another round of captivating talks - this time entitled "Inside Out" which is going to be held at the Santa Monica Art Studios a.k.a. "The Hangar". The talk will start at 6:30 pm on October 28th. Below is an excerpt of this upcoming event:

The insides of atoms determine whether something is sweet, smelly or smooth; the insides of seeds contain all the information necessary to make sunflowers bloom; the insides of planets determine whether they have mountains, earthquakes, magnetic fields. But insides and outsides can be both complex and confusing. A mobius strip curls around on itself so that inside and outside are the same; that 3-pound mass of grey slime inside your head both interprets the outside world—and creates it.

For our October 28th Categorically Not, Caltech mathematician Danny Calegari will talk about how intuitive ideas about inside and outside are formalized in mathematics, and how, once these ideas have been made precise, they become a jumping off point for generalizations or more sophisticated variants. Sometimes the results are surprising: circles in the plane can't be turned inside out, but spheres in 3-dimensional space can be.

Moving into the mind, science writer Sandy Blakeslee of the New York Times and her science writer son Matt (co-authors of the new book: The Body Has a Mind of Its Own) will describe the sprawling network of body maps in your brain determine how you perceive and move about in the physical and social world—providing some fresh answers to puzzles of everyday experience and the mysteries of the mind-body connection.

For a theatrical perspective, Nancy Keystone, director of the Critical Mass Performance Group, will show how actors internalize ideas and then express them through the body. Nancy has created award-winning productions at regional theatres across the country. Her company’s latest piece, Apollo, premiered at the Kirk Douglas Theatre in 2005 (Parts 1 and 2); Part 3 will be presented as a work in progress in LA on November 11 and 12th.
Posted by The Quantum Poet at 5:19 PM No comments: 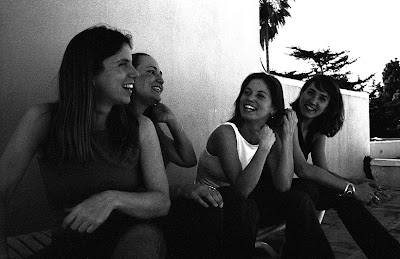 I had the pleasure of listening to perhaps one of the most exciting and upcoming string quartets in Los Angeles. The Eclipse Quartet performed at the Miles Playhouse in Santa Monica last Friday (10/5) with classical guitar virtuoso Marco Cappelli. Was the music baroque and boring? Far from it. Avant garde, avant garde, experimental music. Luscious, mesmerizing, evocative, contemplative, serene, chaotic, energetic, sweet, melancholic, mellow, brash and sublime are just some of the words with which to describe my experience.
The program featured contemporary composers such as Fred Frith whose piece "Fell" beautifully captured the scene of the falling towers on 9/11. I also enjoyed a rather fast and uplifting piece by John King. The quartet comprises, Sarah Thornblade and Sarah Parkins on the violin, Maggie Parkins on the cello and Joanna Hood on the viola. They are all equally talented in their own way. I have no words to describe Cappelli's handling of the guitar. They were both in love with each other, period!
If you are looking for something out of the ordinary, I highly recommend checking out their schedule.
Their website is http://www.eclipsequartet.com/

Posted by The Quantum Poet at 7:48 PM No comments:

I had been anticipating this past Sunday for a quite a while, ever since I read that K.C. Cole would be hosting yet another one of her mentally delicious talks, this time, entitled "Small Differences". This talk was part of a series called "Categorically Not" - a salon/cabaret style environment where science meets art, literature, film, fashion and more.

I invite you to check out the website at http://categoricallynot.com/

The event takes place at the Santa Monica Art Studios, better known as "The Hangar" which is situated near the Santa Monica Airport. There are usually three speakers and for the "Small Differnces" talk, she had invited Eric Scerri, a chemist from UCLA, Paul Stein, a virtuoso violinist from the L.A. Philharmonic and Natasa Prosenc, a Slovenian born video artist. Each one of them them talked about how sometimes small differences can bring about big and marked changes. From Eric's perspective it was about how the chemical nature of elements changes as we move up and across the periodic table of elements. Paul Stein talked about the subtle differences in how music is interpreted in the Philharmonic and the change that a new conductor can bring with himself when he joins an orchestra. Natasa showed some excerpts from her video art that she had filmed in different parts of Slovenia.

What was nice this time was to see so many people. I remember going to the first of these talks, now almost a year ago and seeing very few people back then. I guess the word has been spreading. Parking's not a problem, the atmosphere is casual and friendly and there is always wine and goodies to share. They ask for five dollars donation at the door.

So if you are the intellectual type and curious about the world and the perspective of experts on various topics, I highly recommend attending it. Beats sitting at home and watching TV!
Posted by The Quantum Poet at 7:08 PM No comments: