Where will I be next weekend (Nov. 1 + 2) you ask? Why I will be sauntering, and immersing in some of the finest art that Los Angeles has to offer to folks on this side of globe. It will be a spectacular spectacle of artsy proportions. If you love watching people, then you surely don't want to miss this. I was at the Brewery couple of years ago and enjoyed the experience. The art walk is free along with parking and it starts at 11:00 am and ends at 6:00 on Nov. 1 and 2.
Posted by The Quantum Poet at 10:30 PM No comments: 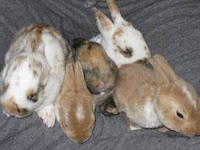 My dear friend Lejla Hadzimuratovic has been involved with finding homes for baby bunnies. So far she has been able to save and find good and caring homes for 102 bunnies. She is an advocate for animal rights, and she at the risk of her own life, was able to get these bunnies out of deplorable and gut-wrenching conditions in Santee Alley, downtown, Los Angeles. You wouldn't want to be in or around that place, trust me! These vendors were selling these bunnies illegally.

When she found these baby bunnies they were only 8 to 21 days old. Right now she is left with 36 babies (8 WEEKS OLD) that DESPERATELY need a loving home TODAY. Please let her or myself know if you would like to adopt a couple or if you know of good soul who can. They are very cute, adorable and make great house pets. She wishes that she could keep them all, but she already has quite a few of her own. She can no longer keep them at her place as the folks who manage her residence have already issued her a warning that Animal Control will take these gorgeous baby bunnies away and they may end up back in Santee Alley yet again. Back to hell!

Please get in touch with me through this blog by leaving a comment or e-mailing me at bilalsha[at]usc[dot]edu. You can also get in touch directly with Lejla at 310 498-8600. Can it really be that hard to find a few homes that will take these remaining 36 bunnies? We need your help. Thank you!


Posted by The Quantum Poet at 8:14 AM No comments: 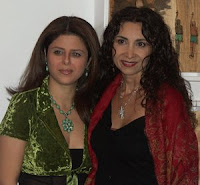 I have been attending the writer's festival at Whittier College for the past two days. On Monday, Pulitzer Prize winning playwright Nilo Cruz read from his prize-winning play "Anna in the Tropics." He also read from his upcoming new play called "Interpreter of Desires." The latter is about an American man who is living in Cuba at the brink of the revolution and who hires an actress to play the part of a woman he loves but who has gone missing. Nilo talked about his life, things that inspire him, ideas on how to write plays and how he does not really think that there is such a thing as a writer's block. It was quite an evening.
Yesterday, I found myself yet again in Shannon Center at Whittier College listening to two extraordinary women of Persian and Palestinian descent talking about their lives, and afterward reading aloud their poetry. Sholeh Wolpe read a few poems from three different books "Rooftops of Tehran," "Sin: Selected Poems of Forugh Farrokhzad," and "The Scar Saloon." Her poems are simple, honest, yet powerful and will shake you to your core. She makes you think about the politics of a nation through what the individual has suffered. Some of the poems she read were quite serious, heavy and laden with beautiful imagery and metaphor. She also read a couple that were more on the light-hearted side.
Nathalie Handal having been raised in Latin America, having lived in France and now New York is a treasure-trove of languages and cultures. This really comes across in her writing and in her reading style. The gesture of her fingers would remind me of an Arabic woman's gesture, while the sway of her hips and the intensity of her delivery made me think of someone from the Caribbean or Latin America.
I could identify parts of my life with both of these women. They are both first generation Americans, both of them poets, both of them have written extensively about political strife in their native lands, and both can bring this about through the human element. I am thankful to my friend Tony Barnstone who invited me to these readings and who himself happens to be an excellent poet.
Posted by The Quantum Poet at 8:09 AM No comments: