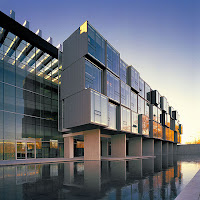 I arrived at the Perimeter Institute (PI) on Monday evening. The flight from Los Angeles to Toronto was uneventful, however, there was something bizarre that happened along the way. After I purchased my e-ticket at LAX, I proceeded to place the bag that I wanted to check-in on to the weighing scales. The lady behind the American Airlines counter tagged it and sent it on its way to the proper airplane. Now as I was going through security-check I realized that I had completely forgotten to screen the checked-in bag. It was too late to turn back and so I prayed to the airport gods that I see my bag arrive safely in Toronto. I am happy to say that I did. I do hope that these bags go through additional checks before they lug them into the stowaway compartment in the belly of the airplane. Incidentally my seat was next to Emily Liman who is an associate professor in the department of biological sciences at USC. It is a small world after all, isn't it? :)
After I procured my bag, I safely made my way to the limo service which the folks at PI were kind enough to arrange for me in advance. I don't think that there's any kind of shuttle that will take you to Waterloo from a Toronto-based airport. I had a nice chat with the driver who dropped me at my apartment - a rather quaint, older-looking building walking distance from the institute. Since I was famished and it was quite late in the evening, I decided to roam the neighborhood in search of food. I made my way to King Street which is essentially lined with all sorts of pubs, restaurants, and small shopping markets. There's a prevalence of pubs here. I guess the Canadians and the folks in the Waterloo-Kitchener area love their burgers and beer. Anyway, I had a great burger at an Irish pub and while I was eating outside on the patio I was entertained by a series of trivia questions being broadcast by the bartender. In all my life I have never scene an Irish pub so quiet! It was quite funny actually and a little disconcerting at the same time.
I spent the whole day today (07/08/08) at PI. I LOVE the building, the space and the layout. It is built in the modern architecture style with tall glass panes, pre-fab, steel and lots of concrete. My office which is on the third floor, overlooks a peaceful lake. The building is laid out on four floors with plenty of blackboards, lounge areas and espresso machines - your conversation essentials. Christopher Fuchs was kind enough to drive me and a couple of visitors to the Institute of Quantum Computing (IQC) at the University of Waterloo. It was a short drive and along the way Chris talked a little about his crazy ideas on the foundations of quantum mechanics. Later back at PI, Michael Skotiniotis (Barry Sander's student) gave a talk related to Spekken's recent work on a toy model for quantum states.
So far PI looks like an ideal place to think deeply on quantum information and interact with some very talented people. Tomorrow I will give my talk on how to encode a single logical qubit into six physical qubits.
Posted by The Quantum Poet at 8:42 PM

Glad to hear you enjoyed your time at PI! During a discussion on the merits of an infocentric approach to science, I mentioned to Henry Yuen yesterday that I was applying to PI's undergrad summer program and he mentioned you had spent some time there.

Always nice to discover others interested in quantum info. Any chance you know whether Brun will be teaching his quantum info course this fall?

Good luck on your PI undergraduate summer application. It is quite an extraordinary place to experience. You will meet the best and brightest in the world of theoretical physics.

I think Todd may be teaching his introduction to quantum information course in Fall 2009. Keep an eye out for it. It is a fun course. I always feel that QIP borders on the realm fiction and reality.