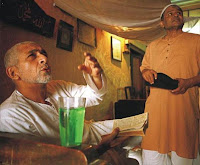 I was at Arclight Cinemas in Hollywood for the screening of Nandita Das's new film called "Firaaq," which is part of the ongoing Indian Film Festival at Arclight. It was a late screening but I actually welcomed that since I cannot deal with traffic in Los Angeles, just like a million other Angelenos.

I had read about the subject matter pertaining to the film and I knew that it would be intense. I don't want to spoil the film for anyone who may want to rent it on DVD, so I won't give the whole movie away. The film is about the aftermath immediately after the Gujarat riots in 2002, where three-thousand Muslims were slaughtered to death, women raped, and children brutally murdered by fundamentalist and fanatic people who don't deserve to be called Hindus.

While there is very little graphical violence in the film, my heart nonetheless was pounding. Nandita Das does a brilliant job of conveying the violence in the way the actors intoned their dialogues, in the way their eyes look scared, tired, and wary, and in the way their frustration, anger, fear, and utter hopelessness was borne in the deep creases of their demeanor. There are several stories that run parallel, and each gives us a glimpse of how the violence affected each and every social strata of society. You must go and watch this film for Naseeruddin Shah's brilliant performance. He has this inane ability to redefine himself each time that he takes on a new and difficult character.

Nandita answered a few questions from the audience at the end of the screening. From all her answers the one I liked the best, and the one that summed up the film was:

"This is a fictionalized account of a thousand true stories."
Posted by The Quantum Poet at 9:55 AM