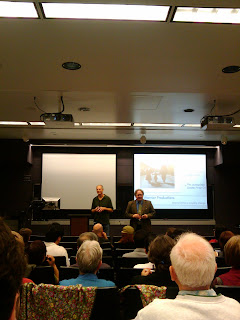 I had the pleasure of watching Frederick Marx's new documentary, "Journey from Zanskar" last night in one of the class-rooms in Taper Hall of Humanities (THH) at the University of Southern California.

The documentary is about two Buddhist monks from the Zanskar region and their quest to take a about dozen kids between the ages of five and twelve from their village to a Buddhist school in Manali. The monks would like to educate the next generation in the Tibetan alphabet, so that they can learn the Tibetan Buddhist scripture and in doing so preserve their language, heritage, and culture. This fantastic documentary gives an account of how these kids along with the monks try to trek through one of the harshest terrains in the world.

Zanskar is the northernmost part of the Kashmir region, and borders Tibet. It lies at an elevation of 13,000 feet, and for most of the year the region is inaccessible to outsiders.

I won't give too much of the film away, but I will mention that Frederick Marx is an excellent film-maker and one can clearly see that this project is a labor of love. What I saw last night was a rough-cut of the documentary, but if that was Marx's rough-cut then I can only imagine what the finished product will look like.
Posted by The Quantum Poet at 12:27 PM