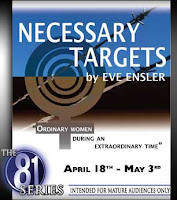 Close your eyes, and imagine for a moment, for just a moment that you are being transported back to 1995 to a Bosnian refugee camp, and when you open your eyes you come face-to-face with the after shocks of a cruel, inhumane, and degrading war.

Last evening I found myself sitting at the Repertory East Playhouse in Santa Clarita and being completely blown away by Eve Ensler's (also wrote "Vagina Monologues") play "Necessary Targets" which chronicles the story of two American psychiatrists visiting a Bosnian refugee camp and helping the women deal and come to terms with the cruelty inflicted upon them during the war by Serbian soldiers. Wars are messy, wars degrade and dehumanize and at the end of the day the cost cannot be measured in the number of dollars spent, or the number of armored tanks lost, but the number of lives they destroy, the number of souls they crush and the ripples, albeit invisible to the naked eye, that persist over generations.

Despite the play being produced at a small theater, the production in my estimate is quite wonderful. There are no gaudy sets. There are no special effects. What there is, however, is a series of energetically interwoven performances by some very talented actresses. I was invited to watch this play by my dear friend Lejla Hadzimuratovic who plays the character of Seada (pronounced see-aa-da). I won't give out the entire play here, but I will say that while the content is heavy, there are lighter moments in the play as well. In spite of all the sufferings of these war-torn women, they are able to muster up the courage to laugh, to even sing and dance and in all this try to hold on to reality, to normalcy, to sanity. I think that all the women acted superbly, but Lejla's performance toward the end send goosebumps up my spine and down to my tear ducts. I also loved Christina Rideout's portrayal of Zlata and the character of Azra played by Barbara Huntington.

The other nice thing about going to a small theater is that you actually get to interact with the actors, and the director. The director Ovington Michael Owston told me how he came to pick this play and it was an enjoyable experience talking to him.

The show runs for another weekend (May 1st through May 3rd) and I implore Angelenos to go and watch this play.
Posted by The Quantum Poet at 11:18 AM

It saddens me when I hear stories like this. Are we ever going to live in a world without war and cruelty?
Milena

I have often wondered about that myself. I really don't know the answer ...