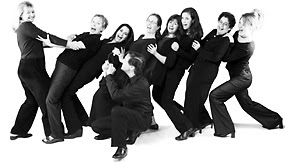 I was at UCLA's Royce Hall tonight and heard the LA Chamber Orchestra perform Vivaldi's four seasons. The evening started out with a contemporary piece composed by Wolfgang through the "Sound Investment" series. In this series, some of the LA Chamber members commission a piece of music to be composed. The other contemporary piece was by an Argentinian composer Piazzolla. The evening ended with Haydn's symphony number 89.
The star of evening was Lindsay Deutsch - a 21 year old violin prodigy. I felt she was technically very adept, but she was trying too hard and seemed to hammer the music at times. Nonetheless, a great performance. The LA Chamber was led by Jeffrey Kahane whose conducting was flawless. None of tonight would have been possible had it not been for my dear friend Sarah Thornblade who is the second principal violinist in the Chamber.
Posted by The Quantum Poet at 11:16 PM