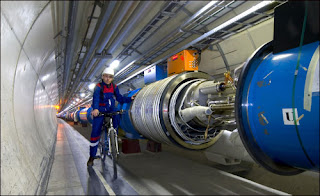 The largest, most complicated, most expensive scientific instrument every built by mankind. I am talking about the large hadron collider which is being built in Geneva and has brought together more than 2,000 scientists and engineers from around the world. The price tag? a mere $8 billion!!
Once they start running experiments in fall this year, the LHC will hopefully shed some light and give some validation to string theory.
Ever wonder why we weigh, what we weigh? Where does mass come from? Higgs' posited a particle that would be the carrier of mass - now the so-called Higgs' boson. The LHC will hopefully shed light on this little elusive bastard.
Here's an awesome article on the LHC that was aired on NPR a while ago.

Should we be terrified? I'm not a layman and I definitely have a limited knowledge of quantum physics, but lots of things could go very wrong with this project with disastrous results - eek!

No, I don't think that there is anything to be terrified about. Things can go wrong and that's why the folks at LHC are running some primary experimental runs to check if all the basic components of the machine are working perfectly. The actual experiment where they will collide two beams of protons is scheduled for September. New York Times has a good article on the recent run.