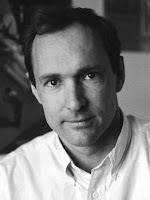 Even those among the general populace who are not computer geeks might have come across the name of Tim Berners Lee. He is often called the inventor of the Internet. He was the first who came up with the HTTP and wrote the first web browser and server during his stay at CERN (Center for European Nuclear Research) located on the Swiss/French border in 1989. While there, he also developed HTML in a bid to unify all the various scientific document formats plaguing CERN at the time. The particle accelerator facility is a huge melting pot of cultures, languages, people, computer hardware and software. Mr. Lee now leads the w3 consortium which overlooks the development of the world wide web and in certain cases perhaps even predict what new technologies might come up and what societal impacts such technologies will have on world. Needless to say that Mr. Lee has won many awards in the past. In 2004, he was knighted by Queen Elizabeth of England.

Now when such a person's talk, whose ideas have made such an impact to our lives is announced the night before, I can't help but wonder that there's something wrong with USC's public relations network. First of all I was surprised that Mr. Lee was being hosted by the Annenberg School and second of all I did not recognize room 207 as an auditorium. The talk was scheduled for noon and I arrived at Annenberg half an hour earlier. People decided to have food before the talk rather than after and before I knew it, it was noon and there was not a seat to be had in the tiny 207 room. It was literally a fire hazard. I was squeezed into a couch with four other people next to me. There were way too many people at the entrance and in the narrow passage ways between the few chairs that were arranged in the room. I could see very few of my colleagues and I was able to count only two professors from the computer science department.

Later in the evening I asked one of the professors if we could ask Mr. Lee to give a talk in the computer science department and he said that he had already asked the Annenberg people and they had declined. Apparently Mr. Lee is at USC for another week and the Annenberg folks are unwilling to give us two hours of his time. I think that's quite selfish, immature and goes against the spirit of learning and academics.
Posted by The Quantum Poet at 11:06 AM

This really is too bad. I missed his talk, and would have loved to have been there. From what I hear it was inspirational.

It really is rather depressing that inter-departmental politics is put above the general student experience. Perhaps most sad is that this isn't a once off occurrence at USC; one need think of the Thomas Friedman talk.

Harry S. Truman famously said, "It is amazing what you can accomplish if you do not care who gets the credit." Over and over again we observe the contrapositive: when people are obsessed with preserving selfish recognition, they'll go to astounding lengths to be counter-productive. It goes beyond mere fecklessness to, at least at my estimate, becoming a purposeful barrier.

I tire of the endless empire building as one academic tries to make a name for him or her self.

shameful! TBL is at USC and the Viterbi school cannot host him! sad.

The talk is now available for viewing honline. Here's a link: http://www.youtube.com/watch?v=u_2YWiaPJ6A